Australian architecture firm BVN and the University of Technology Sydney have created a low-carbon, 3D-printed system that “breathes” like frog skin.

The invention, called Systems Reef 2, is made from recycled plastic that has been 3D printed into a computationally optimized design that contains 90 percent less carbon than a standard air conditioning system, according to BVN.

The system also uses less operational energy because air flows more easily around the organically shaped, branched tubes, with no corners to get caught in.

The invention was designed to address the many shortcomings the architecture studio identified with air conditioning, a technology that BVN co-CEO Ninotschka Titchkosky describes as not much changed since its invention in the early 1900s and “largely designed for manufacturing processes in contrary to human comfort”.

Air conditioning systems are typically made from sheet steel, which, according to the analysis by the BVN and UTS team, results in high carbon content and the use of much more material than necessary. The systems also waste energy because they are structurally inefficient and difficult to change after installation.

“Right now the systems we have are really inflexible, they’re not particularly good for human comfort, they’re very expensive to change, and they’re really limiting how we want to occupy buildings now in the 21st century. more adaptive and agile,” Titchkosky told Dezeen.

A key difference from Systems Reef 2 is that it is “designed for air”, removing one of the main sources of inefficiency in existing systems: right angles.

The orthogonal designs of these systems, while suitable for sheet metal structures, result in air being trapped in corners and requiring more energy to force it out.

“The most shocking thing we realized is that existing air conditioning systems are essentially not aerodynamic and usually don’t even go through a computational fluid dynamics modeling process,” Titchkosky said.

Instead, Systems Reef 2 has an irregular, branched shape with no sharp corners and a tapered shape so that no additional energy is required to force cool air from the furthest corners of the hose.

With friction removed from the system, it is also smaller and slimmer, using less material overall.

To increase comfort for people sitting under the device, the team took inspiration from frogs, which breathe through their skin. Instead of using ducts, they covered Systems Reef 2 with tiny pores that effectively atomize cool air into the space below.

For a low-carbon material solution suitable for 3D printing, they chose recycled plastic, based on the fact that not only is there a lot of plastic waste, but it can be easily recycled again and again, making Systems Reef 2 a circular design is.

The material gives Systems Reef 2 a translucent, crystalline appearance that BVN says is “very beautiful”. There is also the option of printing it in color or illuminating it to personalize an office environment.

The team’s ultimate goal for Systems Reef 2 was for it to be customizable, which they achieved with a click-and-connect system with standardized fasteners and seals to facilitate easy changes.

Because it’s so simple and lightweight, BVN estimates it cuts on-site labor costs by more than 50 percent—a significant appeal given the global labor shortage—while being kinder to installers’ health. 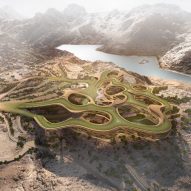 “Not as stupid as an air-conditioned stadium in Qatar,” commentator says

The team uses generative design to tailor Systems Reef 2 to specific spaces, where an algorithm generates hundreds of iterations based on a given floor plan and the final design is chosen and adjusted through manual review.

BVN installed a prototype Systems Reef 2 in its Sydney studio, replacing the existing tertiary ducts and diffusers. It is now exploring more demonstration projects as the design is ready to be launched as a commercial product.

In particular, it sees the product as having great potential for retrofitting aging buildings and says it could theoretically be installed in any open-plan office.

BVN and UTS were awarded best green building material/product for the design at the Australian Sustainability Awards 2022.

It is the second Systems Reef project BVN has undertaken, with each project dedicated to a particular aspect of building installations.

“The reason it’s called Systems Reef is because we started thinking of all the layers in the ceiling as kind of like a reef — this kind of multi-layered environment where everything plays a role,” Titchkosky said.

“We wanted to move away from the idea of ​​a service infrastructure to a service system that was more holistically intertwined and much smarter.”

BVN is an Australian architectural firm with offices in Sydney, Brisbane, London and New York. Current projects include the Sydney headquarters for technology company Atlassian, which will become one of the world’s tallest hybrid timber towers at 40 stories tall.